On October 1st, 2016, we held our third annual Startup Slam event in Victoria, BC. The Sendwithus team, in partnership with Workday and the University of Victoria Computer Science Department, took over the Engineering and Computer Science building from 10 AM until 5:30 PM. The event was a whirlwind of activity, with over 300 students, developers, and tech enthusiasts coming together for a day of workshops, education, and community building. This year’s record turnout was a 100% increase over last year and a strong indicator of the growing Victoria tech community.

Startup Slam would not have been possible without the support of our community partners, sponsors, and volunteers. This year’s Startup Slam was powered by Workday and several Workday volunteers were on the ground helping out throughout the day. Workday also hosted an awesome workshop on WebSockets. In addition, more than 20 local companies supported the event, proving how Victoria’s tech community loves coming together to share knowledge and insights with the next generation of developers and entrepreneurs.

All of these companies came together to make Startup Slam 3.0 a huge success. What is Startup Slam?

Startup Slam is series of workshops presented by leaders in the Victoria tech community. This year we had three tracks of workshops: Junior Tech, Advanced Tech, and Entrepreneur. The entrepreneur track was a new addition this year, in an effort to make the event more inclusive for non-developers, business students, and startup enthusiasts.

The complete list of workshops held this year was: We also introduced the Side Project Side Table this year, which provided attendees a chance to discuss passion projects with professional developers and mentors. The table was operated and sponsored by mentors from Ladies Learning Code, who spent the day reviewing side projects, giving feedback, and discussing with students what they enjoyed building. In exchange for sharing their side projects, students were entered to win a random draw for a $500 scholarship (furnished by Hello Ventures). It was really exciting to hear about all the great products/ideas that students are building and iterating on. 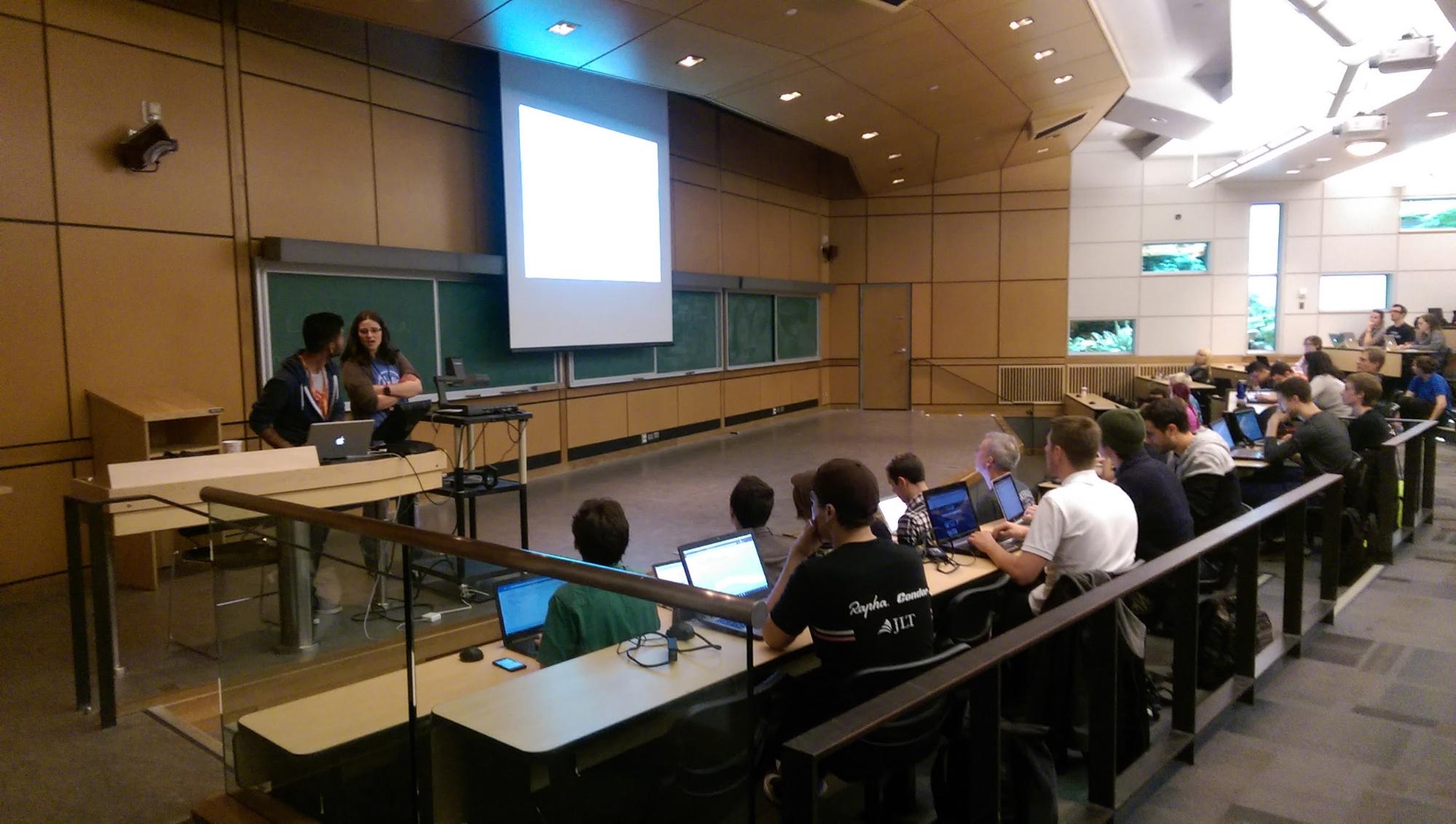 What is the point of all this?

Startup Slam has two goals – and no, one of those goals was not to see if we could order the most pizza for any event in Victoria but for the record, this crew did demolish over 140 pizzas – the first goal is to introduce modern and industry-focused technologies and concepts to students who are predominantly learning and building in an academic environment. These two styles are very different and, like any industry, the more exposure to how things are done “in the wild” is always a benefit to students who will be entering the job market in the near future.

The second goal is to expose students to the variety of tech companies operating in Victoria. Too often we hear from students that they had no idea how many companies have offices in Victoria. By learning and interacting directly with founders and early employees of these companies, students receive a thorough introduction to the growing Victoria tech scene. The Entrepreneur Track exposed attendees and students to what it is like to build early products, start companies, and how to bring an idea to real customers. Another year, another Startup Slam has come and gone. The chaos has mellowed, the dust has settled and now we look forward to BattleSnake 2017! We’re looking forward to a bigger, more expansive programming competition than ever before. The mettle of your team will be tested in battle and the winner will be the last team standing. What that battle will look like, well, you will just have to stay tuned to find out. Follow us on Twitter and Facebook to keep up to date on BattleSnake 2017 and other community events hosted by Sendwithus.

Want to get involved? Reach out to the Sendwithus team at events@sendwithus.com if you are interested in sponsoring, volunteering, or participating in BattleSnake and/or Startup Slam.